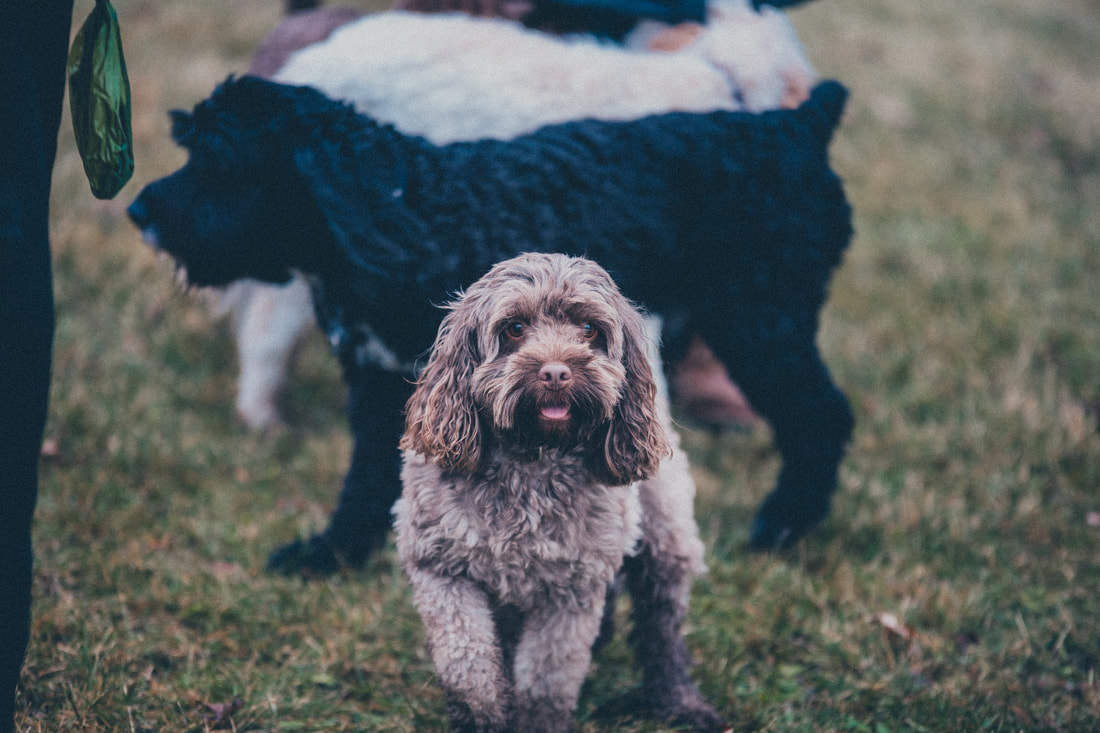 
1. Allergies: are common in most dogs breeds today and Cockapoos and Bernedoodles are no exception. There are many reasons for allergies to occur. They an be environmental, food based, as well as genetic. The main cause for allergies in dogs is being bombarded by the same thing day in and day out. For instance you have fed your dog the same food for years (why mess with what works right) and all of the sudden your dog is suffering from allergies for the first time. You follow the Vets advice and have your dog tested for allergies. To your surprise you find that you dog has developed allergies to 1 or more of the ingredients in it's food. This is a very common scenario in both dogs and people. Moderation is the best defense to keep your dog free of allergies this also carries over to the environment they are surrounded by as well eg: Smoke, grass mold, leaves, trees.... It is best to rotate your dogs food every  4-6 months to something new.
Allergens can be problematic when inhaled, ingested or contact a dog’s skin. As his body tries to rid itself of these substances, a variety of skin, digestive and respiratory symptoms may appear. Allergic dogs may also suffer from secondary bacterial or yeast skin infections, which may cause hair loss, scabs or crusts on the skin. Any dog can develop allergies at any time during his life.
Allergies can also be hereditary. It is a possible for the parents to pass certain allergies onto their offspring.The best way to treat allergies is to remove the offending allergens from the environment.

Luxating Patella: is a common condition, particularly in small and miniature breeds. Rarely, it can be caused by some form of blunt trauma, but most frequently, it is a developmental congenital defect. The condition can also be inherited through genetics and can also be caused by obesity. Diagnosis is made through palpation of the knee, to see if it slips inside the joint more than would normally be expected.. Even with Luxating Patella, there may be no symptoms or only mild ones, such as intermittent limping in the rear leg. More extreme cases can result in severe lameness. Oateoarthritis typically develops secondarily. There are four diagnostic grades of patellar luxation, each more severe than the previous: Grades II, III and IV require surgery to correct, if the animal has difficulty walking.Some Grade IV conditions may require more involved surgery to realign the femur and/or tibia.(Wikipedia)


Progressive Retinal Atrophy Progressive Rod Cone Degeneration (PRA-PRCD):  The genetic disorder, prcd-PRA , causes cells in the retina at the back of the eye to degenerate and die, even though the cells seem to  develop normally early in life. The “rod” cells operate in low light levels and are the first to lose normal function. Night blindness results. Then the “cone” cells gradually lose their normal function in full light situations. Most affected dogs will eventually be blind. Typically, the clinical disease is recognized first in early adolescence or early adulthood. Diagnosis of retinal disease can be difficult. Conditions that seem to be prcd-PRA might instead be another disease and might not be inherited. Genetic tests assist in making the diagnosis. Prcd-PRA is inherited as a recessive trait. This means a disease gene must be inherited from each parent in order to cause disease in an offspring. Although prcd-PRA is inherited, it can be avoided in future generations by dna testing dogs before breeding. Identification of dogs that do not carry disease genes is the key. These "clear" dogs can be bred to any mate - even to a prcd-affected dog which may be a desirable breeding prospect for other reasons. Unfortunately, at this time there is no treatment or cure for PRA. (Optigen)

Glycogen Storage Disease V11 (GSD V11)/Phosphofructokinase Deficiency (PFK): (cockapoos) is an inherited disorder where an essential enzyme, phosphofructokinase, is deficient. This enzyme, PFK for short, is critical in the conversion of glucose to energy, particularly in red blood cells and muscle cells. Dogs who are deficient in PFK will have muscle and red blood cells that cannot supply their own energy needs, which becomes most apparent in times of stress or heavy exercise. Much of the time, during levels of low stress and exercise, they will have a lower-than-normal level of red blood cells ("persistent mild anemia"), which may not be as readily apparent and may not exhibit any visible symptoms. It is in times of stress and exercise that the condition would become obvious and likely demand veterinary attention. Most of the symptoms would appear after stress, exercise, heat, or excessive barking, and they include tiredness, weakness, apparent muscle cramps, pale gums, and high fever. One symptom that is often the identifying factor of the disease is dark-colored urine, caused by the breakdown of blood products. Phosphofructokinase Deficiency is an autosomal recessive disease, meaning that, to be affected, a dog must inherit one copy of the mutated gene from each parent. Therefore, parents of an affected dog would be either affected themselves, or a carrier of the recessive gene. Carriers, while not showing clinical signs of PFK Deficiency, do in fact have a decreased level of PFK in the blood cells and muscle cells.While there is no actual treatment for Phosphofructokinase Deficiency, it can be successfully managed to the point that affected dogs may have a relatively normal lifespan. The most important "treatment" is managing the dog's activity and stress levels, to prevent more severe anemia. In cases where anemia becomes critical, veterinary care is required to manage the condition until it normalizes. (Quality Dogs)

Degenerative Myelopathy (DM):  is an incurable, progressive disease of the canine spinal cord.Onset is typically after the age of 7 year.  Progressive weakness and incoordination of the rear limbs are often the first signs seen in affected dogs, with progression over time to complete paralysis. . Myelin is an insulating sheath around neurons in the spinal cord. One proposed cause of degenerative myelopathy is that the immune system attacks this sheath, breaking it down. This results in a loss of communication between nerves in lower body of the animal and the brain. Degenerative myelopathy initially affects the back legs and causes muscle weakness and loss, and lack of coordination. These cause a staggering affect that may appear to be arthritis. The dog may drag one or both rear paws when it walks. This dragging can cause the nails of one foot to be worn down. The condition may lead to extensive paralysis of the back legs. As the disease progresses, the animal may display symptoms such as incontinence and has considerable difficulties with both balance and walking. If allowed to progress, the animal will show front limb involvement and extensive muscle atrophy and paralysis. Eventually cranial nerve or respiratory muscle involvement necessitates euthanasia or long term palliative care. Progression of the disease is generally slow but highly variable. The animal could be crippled within a few months, or may survive as long as three years or more. Degenerative myelopathy is an irreversible, progressive disease that cannot be cured. There are no treatments that have been clearly shown to stop or slow progression of DM. (Wikipedia)

Exercise Induced Collapse (EIC): is a genetic syndrome. Affected Dogs show signs of muscle weakness, incoordination, and life-threatening collapse when participating in strenuous exercise or activity. Affected dogs can tolerate mild to moderate exercise, but just 5 to 20 minutes of strenuous activity, or even extreme excitement such as that seen in field trials or hunt tests, can induce weakness or collapse. Dogs Affected with EIC usually cannot continue with intense training, but can live normal lives as house pets. Dogs of either sex can be affected. Dogs with this condition are always normal at rest and are usually described as being extremely fit, prime athletic specimens of their breed. Nervous system, cardiovascular and musculoskeletal examinations are unremarkable as is routine blood analysis at rest and during an episode of collapse. There is a DNA test available to identify the EIC mutation among the several breeds affected by this genetic syndrome. (Wikipedia)

Von Willebrand Disease 1 (VWD 1): Von Willebrand Disease (VWD) is the most common hereditary blood-clotting disorder in dogs. Dogs with VWD don’t have enough of a certain protein, called Von Willebrand factor or factor VIII, in their blood. This protein is necessary for blood to clot, especially during the early stages of bleeding. Von Willebrand Disease is caused by genetic mutations that interfere with the production or function of the Von Willebrand factor protein. Both males and females can pass this genetic mutation to their puppies. There are 3 different types of VWD, based on whether Von Willebrand factor is reduced or entirely absent Type VMD1, VMD11 and VND111. Most dogs with VWD don’t have noticeable symptoms and are only diagnosed after surgery or an injury that causes bleeding. Dogs with severe VWD may bleed spontaneously from their nose or gums, have bloody stools and urine and bleed profusely during and after surgical procedures. Von Willebrand disease is caused by genetic mutations that impair the synthesis, release, function or stability of Von Willebrand factor.Von Willebrand disease (VWD) can cause a serious, and sometimes deadly, bleeding disorder. The disease disrupts normal blood clotting functions and causes excessive bleeding from even superficial wounds. Von Willebrand disease cannot be “cured,” but it can be managed so as to increase a dog’s chances of recovering fully after a traumatic or surgical event. The goals of treating dogs with VWD are to control spontaneous bleeding, reduce the frequency of induced bleeding episodes and correct any underlying conditions that might contribute to the dogs’ bleeding disorder.Most dogs with blood clotting disorders caused by VWD have a good prognosis for a fairly normal quality and length of life, with only occasional transfusions being necessary. Dogs with more severe forms of the disease may require repeated and aggressive transfusion therapy. There is dna testing available to identify affect dogs and for screening breeding dogs. ﻿﻿﻿(Pet Wave)﻿﻿﻿

IC/Furnishings stands for - "Inproper Coat Funishings"
This is not a health issue but I wanted to give clarity on what this is as is is listed under our testing for our dogs.
A Cockapoo or Bernedoodle either has Improper Coat or Furnishings.
Improper coat resembles the look of the the Cocker or Bernese MD, with a smooth face and shorter hair threw out the body Also known as a Smooth or Flat coated Cockapoo.
Furnishings on our Cockapoos and Bernedoodles  is what we strive for and is what gives the adorable hairy face and Teddy Bear looks doodles are known for. Testing results for the Gene will either be "affected" , a "Carrier" Or have "Furnishings"(non-Carrier). A "Carrier" has the full furnishings but can produce "Affected" or "Improper Coat" This test simply tells us what type of coat possibilities any given dog could produce and has no barring what so ever on the health of the dog but does have barring on whether or not your dog will shed. Examples:
Improper Coat "Affected" Will produce improper coat unless paired with a non-carrier and will most likely be low shedding 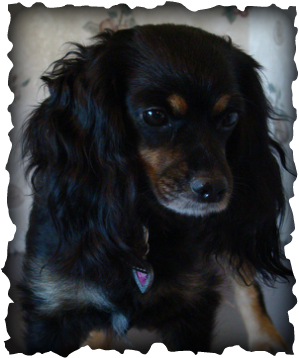 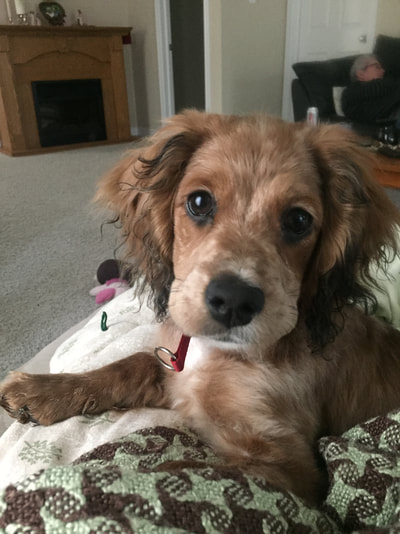 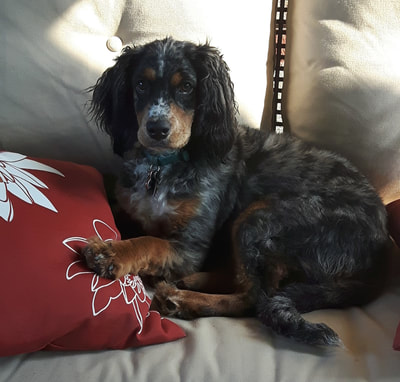 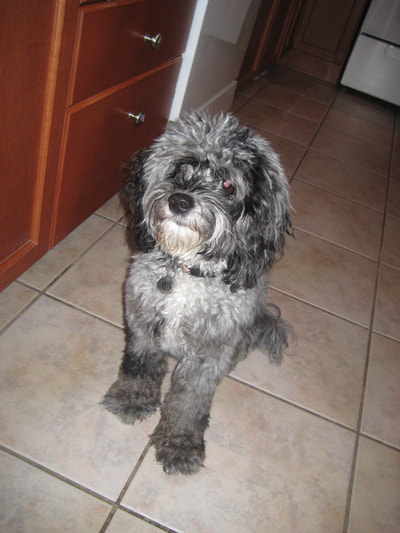 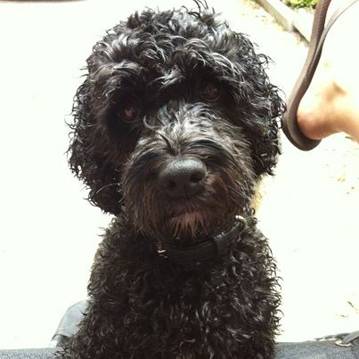 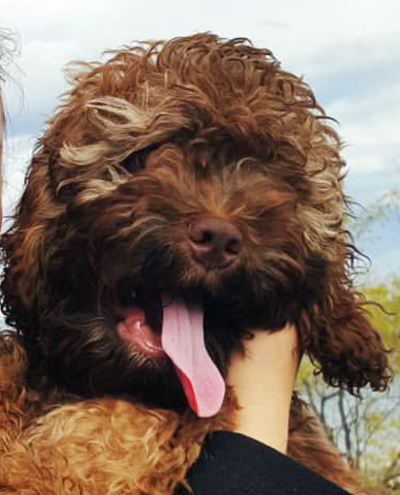 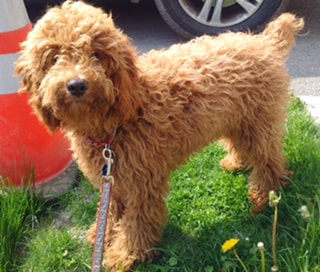 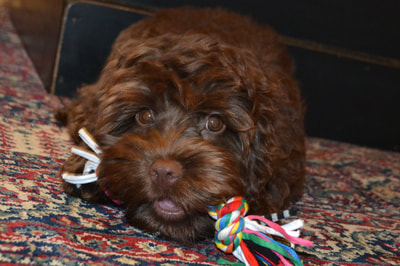 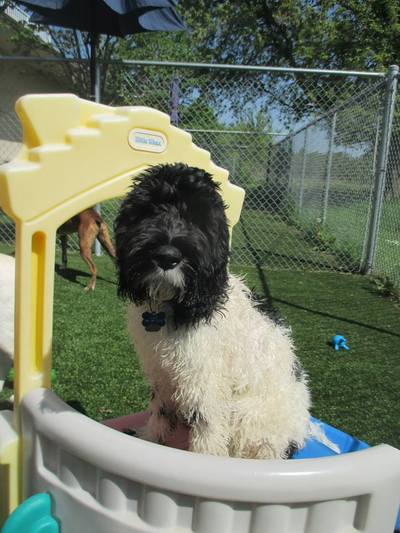